Late July and early August days are filled with my least favorite job – bottling. It’s both stressful and monotonous. We bottle our Chardonnay, Cabernet Sauvignon and Next Red (all from our Alexander Valley vineyard) in three extremely long weeks. Four of us work on the bottling line. For the Chardonnay, we had Ricardo (our assistant winemaker), Aymeric (known as “Rico”) and Guillaume (two Frenchies, read more about them here). For the red wines, Martin (who also works in the vineyard) took over for Guillaume who escaped the monotony and returned to France to enjoy the rest of his Summer vacation. The three rotate positions on the line after each pallet is finished while I oversee the line–monitoring the equipment; replenishing glass, corks, labels, capsules; ensuring that the process goes smoothly.

Using our GoPro, we videoed the Chardonnay bottling. After watching one minute of it, we realized that it would be more interesting (and fun!) to see the process sped up (100x!). (Check out the name of the song!)

Rico is on the right at the beginning of the line, placing the empty bottles onto the conveyer. The bottles move down the line, where they are first sparged with Nitrogen to reduce the amount of Oxygen in the bottle (and prevent premature aging.) Next they are filled with Chardonnay then corked. The bottles continue down the conveyer where a capsule drops down and is spun onto the bottle. Then, each bottle is labelled twice…front and back. Ricardo is at the end of the line, inspecting each bottle and putting it into the case. Guillaume gets a workout stacking the filled cases on a pallet. (Each case weighs about 38 lbs. He will lift 1,824 lbs to fill a pallet!) You will see me dart in and out doing various tasks and keeping an eye on the entire process. 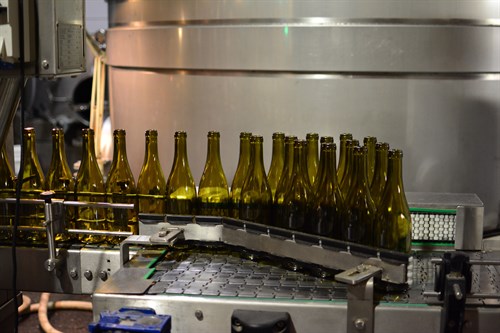 Finally! Bottling is over for the year and we can all breathe a little easier knowing that it all went well. The 2014 Chardonnay, 2013 Next Red and 2013 Cabernet Sauvignon are in the bottle and will spend one, two and three years respectively aging until they are released to you. 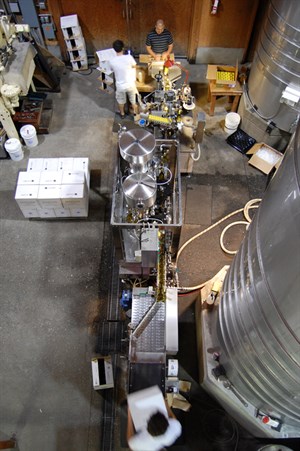 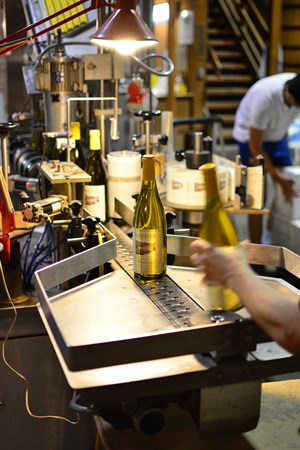 Now we start to prepare for Harvest. The cycle begins once again.

To read more about bottling and watch us bottle the 2014 Rosé back in February, click here.