What began as a simple request has become a 34-year tradition. A friend of a friend asked me if we would host a young French enology student during harvest. Because Sarah and I were interns in France in 1981, the answer was easy… yes, of course! Fast forward 34 years and we have our 35th intern, Pierre Bardinet.

“Pierre the 5th" as he is affectionately called (he is our 5th “Pierre”), comes from a winemaking family in St. Emilion. Last June (before he arrived in California) Sarah, Grace and I met Pierre, his parents (Anabelle and Sébastien) and his younger brother (Henri) at his mother’s winery, Château Corbin, where we enjoyed a wonderful dinner together.

Pierre arrived 2 weeks before his internship began so that he and three friends could tour a bit of California, and tour it they did! They rented a van that slept two people inside and two on the roof. They drove from Oakland to Santa Cruz onto Monterey and Santa Barbara, then across to Sequoia National Park and back to Malibu and Los Angeles, logging over 1,000 miles before they flew back to San Francisco. 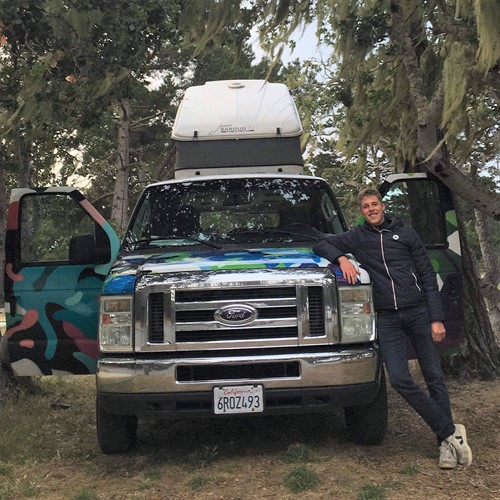 Pierre returned just in time for bottling which is never an enjoyable task, but every morning he arrived at the breakfast table with a smile on his face and every evening, he thanked us for the great day. Pierre has a great sense of humor and has fit into our family well. When he was invited to Kate’s house for a Greek dinner, he arrived in a toga. He and a friend made a movie about life at Hafner Vineyard.

Cycling with friends is one of my favorite past times and Pierre has joined the club. A ride around Sonoma County followed by an iced vanilla latte at the Goat is now his weekend ritual. In fact, last Sunday when a friend from St. Emilion was visiting, Pierre asked if the three of us could go for a ride and stop by the Goat. He even joined Strava so we can track our rides and see our improvement. (And yes, I will continue to follow him on Strava to ensure that he keeps riding!) 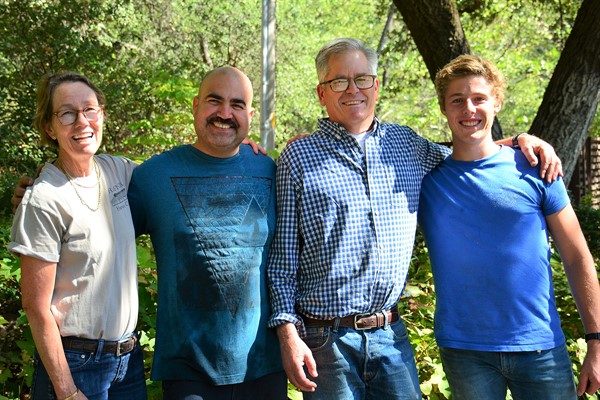 Our dogs, like all of us, adore Pierre and he has become a lover of Labradors. Annie and Millie wait every afternoon for Pierre to return from the winery. They sit patiently outside his bedroom door in hopes that he comes out in his bathing suit. When he does, they bark with joy and anticipation of pool time! At the winery when Millie is there, Pierre plays the “light game” with her. She loves to chase the light of a flashlight or headlamp, both of which we use often in the caves. Some days when he is working in the caves and I am upstairs in the lab, I can hear Millie barking enthusiastically and Pierre laughing. 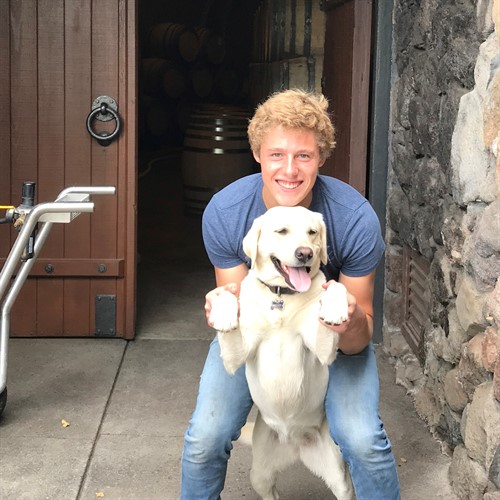 At work, Pierre is a fast learner and anticipates what needs to be done. Whether it’s clean up after a long day of harvest or filling 70 barrels, Pierre is always upbeat and enthusiastic. He has been a real asset to our production team and a true pleasure to have in our home.

He is the newest member of our family. To say that we will miss him when he leaves is an understatement, but we look forward to seeing him again both here and in France for many years to come. 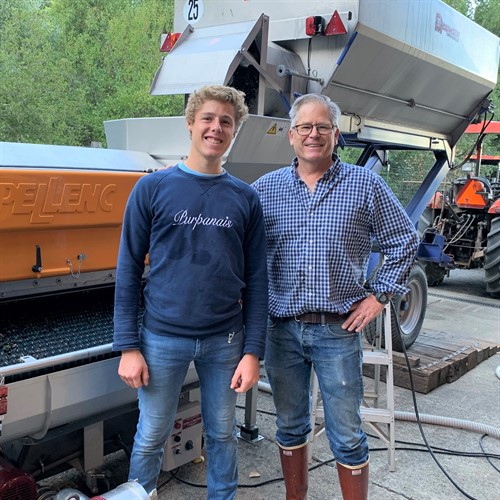