We are lucky to be the experimentation ground for our friend and budding photographer Chris Bingham. Over the past years, Chris has been honing his photography skills here at Hafner Vineyard whether it be out in the vineyard during Harvest or in the cellar for bottling or on the hillsides in the midst of fires. Followers to our Instagram account (@hafnervineyard) have seen his work pop up here and there. It’s been a delight for us to watch his evolution and a total treat to see all the results.

Last Harvest, Chris took his photography experiment here to a new level by focusing on “stop motion photography” during the post-fermentation draining of Cabernet. The images are evocative and dramatic. We wanted to share the photos with you and give you a little peak into this artist’s life. Here is my interview with Chris.

Tell us about yourself.
I am a retired military pilot with 15 years as a Naval Aviator and five years in the Air Force retiring in 2007 with the rank of Lieutenant Colonel. I then worked for the Veterans Affairs office in Sonoma County and retired from there ten years later. Using my GI Bill benefits, I went to art school and received a Masters of Fine Arts in Photography. Ever since, I’ve been continually learning and refining who I am as a photographer. 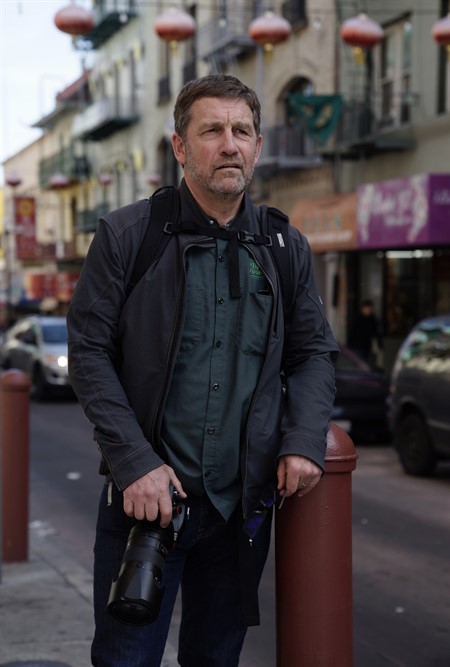 How did you get into photography? I have always loved photography and been surrounded by beautiful photographs. My grandfather worked for the Seattle Times and his friend was chief photographer so his black and white photos hung around our house. I usually had a camera wherever I went whether it was to college or on my military deployments. I was drawn to photography, but it was pretty much photography by trial and error. In March of 2017, a client of mine at the VA told me that he had just completed a Master’s degree in photography, and his experience totally resonated with me. I was intrigued, thought about it, and shortly after, gave my employer three months’ notice, and retired on August 17, 2017. A week later, I was starting my first class in San Francisco.

Classes in San Francisco?! That’s quite a trip and dedication to travel from Sonoma County.
The commute was an experience. I drove to the train, which took me to San Rafael, then a bus ride to the ferry, the ferry to San Francisco and a walk to class. I found the commute to be a huge part of my learning. It forced me out of my comfort zone. Being a military pilot, I was pretty sheltered from the diversity that I was now experiencing.  The new experiences really made me look at the world through a difference lens both literally and figuratively.

What has it been like becoming an artist?
The progress of becoming an artist has changed me. It forced me out of my comfort zone and I had to overcome the stage fright/vulnerability of interacting with my subject, and sharing my work with others. My final project for school was a lifechanging experience. The original concept of the project was a lyrical documentary series showing the wine industry from the workers’ perspective. As a small vineyard owner, I had unique access to my subject matter, but I ultimately realized that the cultural and experiential differences between me and the workers would not allow me to present their perspective.  It is my perspective of their activities in the vineyards and wineries of the Alexander Valley. I spent a year following a vineyard crew from Munselle Vineyards, a local vineyard management company. As I started sharing the project photos with instructors and fellow students, one of my instructors challenged me to “get closer” to the workers. At first, I thought he meant physically, but as I slowly earned the trust of the workers, I realized that “get closer” meant both physically and emotionally closer. I spoke little Spanish, they spoke little English, but with the help of Google translate, we managed to have conversations about work, friends, family, food and life.  These were good, hardworking people with hopes and dreams of a better life for them and their families.  I built a friendship with the team and in particular the crew supervisor, Innocencio “Chencho” Vargas. Chencho taught me a bit of Spanish, and I taught him a bit of English. Getting closer allowed me to capture nuanced moments, expressions and perspectives that without that friendship would never have happened.  I got closer, and my work became more meaningful.

Whenever I would post new photos to social media, I was humbled by the level of interaction by the crew, their friends and family. They seemed quite proud of seeing themselves in the in the way I was showing them. I am touched to see how proud they are of the photos and their work.

How did you conceive of the “Flow” series?
Well, the Hafners let me experiment a lot in the winery, caves and vineyard. I am grateful for their patience, and allowing me to have to have a safe place to practice new techniques!  I have always loved crush; watching the grapes become wine is mesmerizing! Seeing the red wine dripping from the tank as it was emptied for pressing the skins, inspired me to experiment with stop motion photography; testing flash duration, direction, and power. In this sort of photography, flash duration is more important than shutter speed. The shorter duration the flash, the more you freeze the motion. This series was created over three separate days in October 2021. Each day I learned something new about the process that I changed the next time. This series is macro photography, a technique where the camera and lens is very close to the subject matter. Even with very small apertures, there is a very shallow depth of field so keeping the flow in focus was challenging with a constantly moving target.

Here are my three favorite photos from the series: 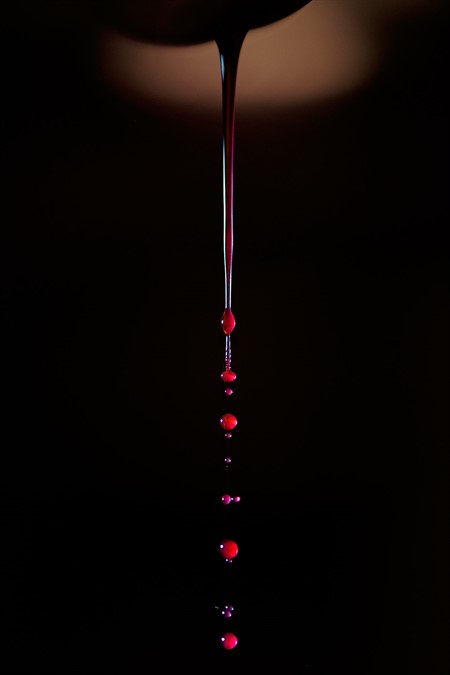 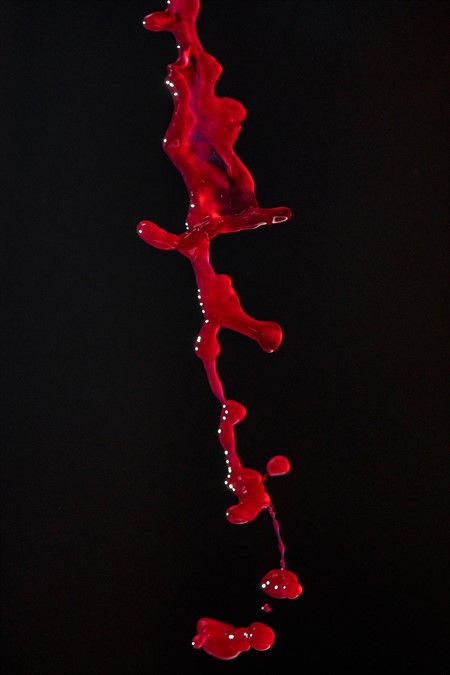 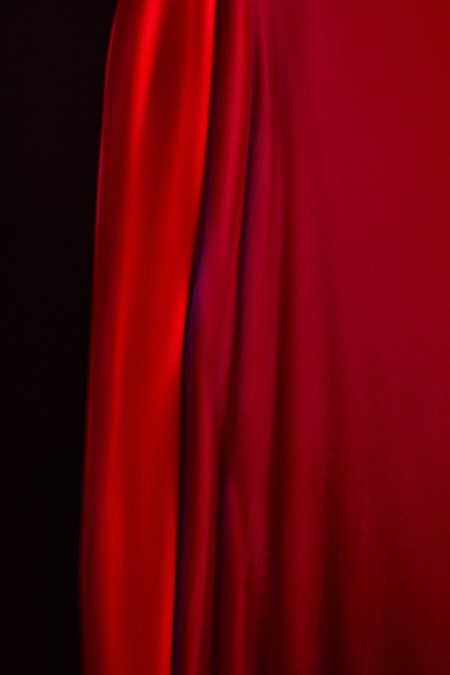 What is actually happening in these photos?
This is red wine being drained from a tank after fermentation.

Here you can see what is actually happening. Parke is draining the tank and the above photos are a very close perspective to the wine flowing out of the tank. 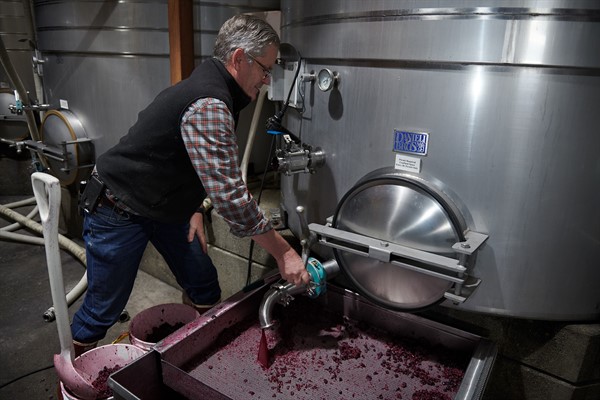 Here are three photos closer to the wine draining: 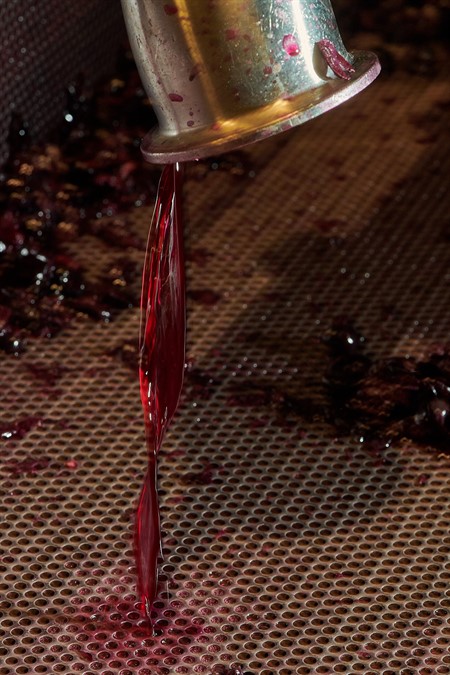 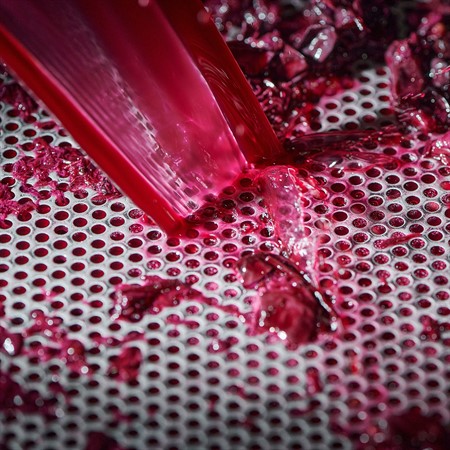 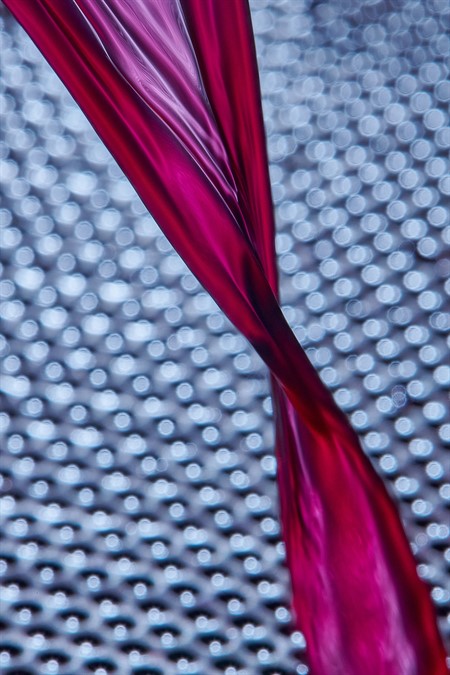 What was it like taking these photos in an active winery?
I had to juggle working around Parke, Ricardo and Benito. I hate to feel in the way, and I didn’t want to slow them down. I knew I could only be in there while they weren’t working, so I had a five-minute window to take the photos while they loaded the press with the skins. Once the skins were loaded, I’d move out of the way while they shoveled out more. 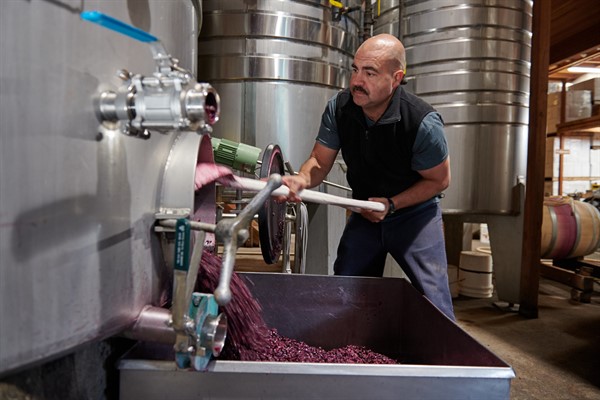 This project catered to my introvert analytical tendencies. I was hyper-focused on utilizing that short time to make adjustments. It was a total stimulation for me. I was geeking out on shutter speed, flash and lighting, making tweaks here and there. I am looking forward to this year’s Hafner harvest and red wine fermentation because I have more playing to do!

How did you take the photos?
The key is lighting. It is very hard to do without a high-power flash at a very low power (The output of the flash was between 1/64th to 1/256th of the maximum output). I used a studio monolight with a “snoot” (a light modifier to make the flash into a very narrow beam). That way it illuminates just a narrow area. Getting the lighting right is a balancing act between flash power level, shutter speed and aperture. With bright outdoor light, you can use a fast shutter speed to freeze motion; in a darker environment, a short duration flash works much better.

You have this series hanging in your office. What do people say when they see them?
I have them as 11x17 prints on matte photorag that are the first thing you see when you walk into my office. The first things most visitors say is, “What is this?” They are astonished when I tell them it is wine. They usually spend a couple minutes quietly staring at them, with an occasional comment or question about some aspect of the image. While the electronic images you are seeing are pretty cool, the physical prints are tactile; beautiful and sensual with an almost velvet appearance that invite the viewer to linger and enjoy (much like a well-aged Hafner Cab!). As a culture, we have gotten so used to scrolling through photos, spending fractions of a second before moving to the next image.  When someone stands before a physical print, the experience is entirely different.  I may use them for public display sometime in a larger format print. In the meantime, I’m just happy to look at them.

Half of the art of photography is the print. For those of you who live in the San Francisco Bay Area, I highly recommend that you make a reservation at Pier 24 Photography and get an intimate experience with one of the best private photography collections on the west coast.

You can see more of Chris’ work on Instagram @christopher.d.bingham and @alexander.valley.photography