6 Months after the Fires

It’s been six months since the fires ripped through Sonoma, Napa, Lake and Mendocino Counties. Every day, we are reminded of its impact on our community and landscape – traffic jams through Santa Rosa where the fire crossed six lanes of highway, dump trucks filled to the brim with debris from burned homes, charred trees spot the hillsides, and each day new stories are shared. Everyone has a story of their experience with the fires. Everyone was impacted in one way or another – some much more than others.

We’ve been so grateful for the concern of our patrons, friends and family both during the fires and in the months that followed. We chronicled our experience during the fires and thought readers might be interested to hear where we, as a community, are six months later. 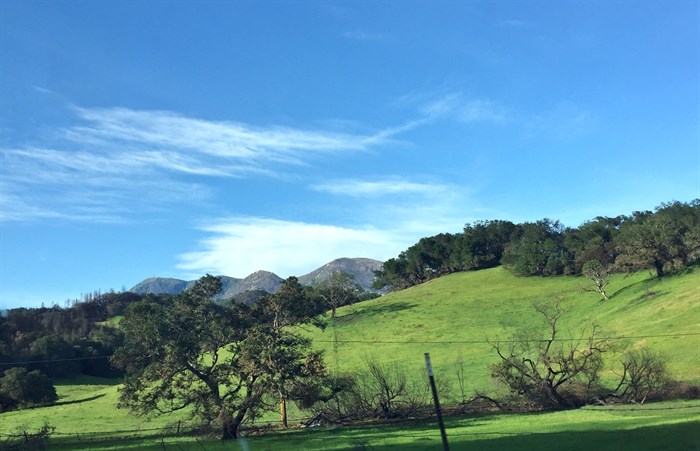 This area was near the start of the Tubbs Fire. Previously black and burned, new grasses now appear covering the ground, and this Live Oak is pushing new growth. Along the ridge line in the back left, you can see the silhouette of burned trees. Photo taken: April 1, 2018

Our local newspaper, the Press Democrat, has done a wonderful job of reporting on the fires and their aftermath. They dedicated an entire section online to chronicling any articles related to the fires. It is worth visiting their fire section for a more thorough report of the fires and the recovery efforts.

After the fires were put out in late October 2017, the winter rains loomed. This caused great concern about hazardous run off into the riparian areas and the potential for mudslides, flooding and erosion, which is what happened last year in Santa Barbara after their terrible fires. This map was a collaboration of many agencies to help determine potential flooding risks. It outlines the fires. Within the fire zones, different colors demonstrate the potential flooding risk. As you zoom in over a fire, blue lines appear signifying the rivers near the fire. 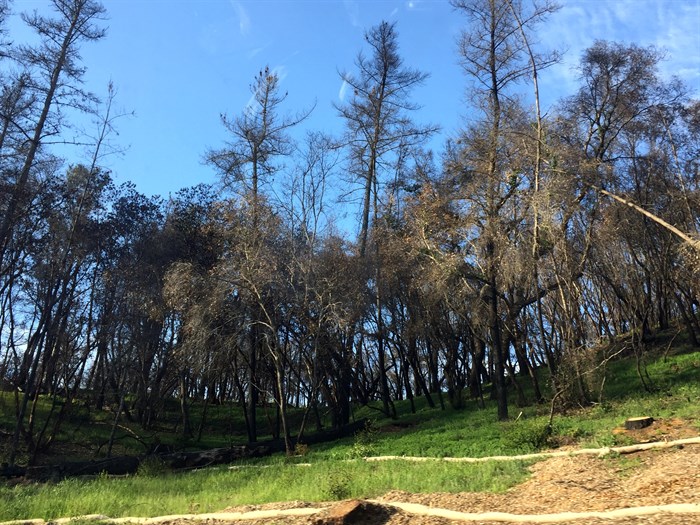 The clean-up has been daunting. First the EPA helped homeowners clean up any household hazardous waste. Then the debris needed to be removed which was done either by Sonoma County or a private company. Some homeowners are now starting to rebuild, while others are selling their vacant lots.

In the months that followed the fires, tourism slowed across the counties. News outlets, local trade organizations and businesses worked to show the country that we wanted visitors and that the area was safe to travel to. In early November, NPR and CNN both wrote pieces encouraging people to visit our area, sharing photos of many towns untouched by the fires. (Read CNN’s article here or this is NPR’s article on the tourism post-fire.)

The housing market in our area was already tight prior to the fires. In Santa Rosa alone, the Tubbs fire destroyed 4,658 homes, so after the fires, housing prices and rents soared. This interactive map displays aerial imagery over Santa Rosa from before and after the fire. Using the slider in the middle of the screen, you can see the dramatic and devastating effect the fire had on entire neighborhoods.

During the past six months, our community has strengthen and worked together to try and repair some of what was lost. These stories are what remind us that we will rebuild and overcome this tragedy.

When I drive through areas that were burned by the fires, I’m reminded by the incredible power of nature. Hillsides that were blackened still have charred trees, but beneath them, bright green grasses have sprouted creating a blanket of tender growth. (Read a wonderful blog post by the Sonoma Land Trust to see how their lands are recovering.) Throughout Santa Rosa, many piles of debris are now gone but the signs remembering those we lost and thanking those who put their lives in danger still hang proudly. 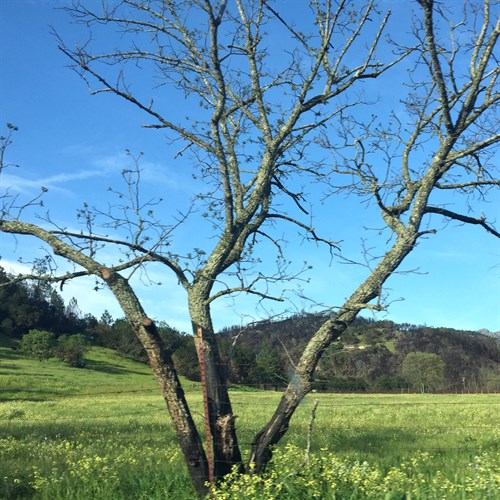 The Press Democrat created a slideshow contrasting current photos of places around the county with ones during the fires.

It’s been six months since we experienced the nightmare of uncontrollable fires spreading across counties. But now, we are rebuilding, and we are grateful for all the support we’ve received. My friend who lost her house said that now six months later, she still has moments of sadness and feeling homesick, yet she is grateful for the stronger bond that has formed between neighbors, and she is hopeful that her community will be restored to the beautiful place she is proud to call home.